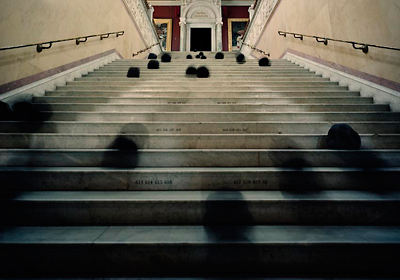 In Commoncause (2008) Friberg looks at the social problems and promise presented by masses of humans without any obvious bodies depicted. She wrapped 300 half-deflated basketballs in black velvet and rolled them down the steps of the Nationalmuseum in Stockholm. Their covering, which is similar to her costuming device of dressing her performers in dark suits, turns the balls into an undifferentiated mass of quasi-unique units, much like a hoard of people riding the subway or exiting a theater. The mysterious motion is accompanied by the sound of the actual event, which is reminiscent of distant thunder or a stampede, both of which are apt metaphors for the types of group-thought and activities that the artist intends this avalanche to conjure.