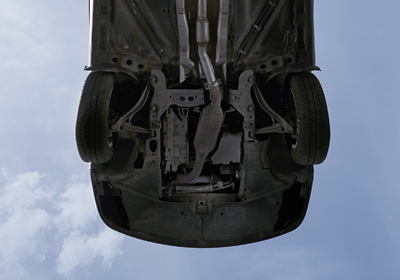 Transmission is a film and photo project (3.40 min Loop, and four still photograph).
I first got the ide when I was living in NYC 2001-2002. Then I just wanted to put a camera in the one of the wholes in the street and shoot the flow of cars passing over your body. It was a strong feeling of power , macho cars and speed in the city.

Now 2010 the approach to cars is very different, more interesting and complex. So for me the idea felt nessesary to realise now.
Today muscle cars in the US are sold for less and carcompanies are going down or are up for big changes. The macho feeling is gone people think more of the nature, and you want to be assosiated with new values like smart thinking and cool inveromental ideas, resicling design. The old values when the car was a macho sybol for potens and power is gone and goes together with the new ideas of maculinity.

The project can also be read as a goodbye, to this eara, the approach is not djurchamental but more loving, and a realise that is past time and the world is moving on, the works have an arciology dimention, in our own past time right now.

The flow of cars in the sky looks very abstract , like they are already gone, or on they way in an other dimention. I’m shooting the cars from undernneth to get the felling of vunrability, they look like bugs on their back with the metalic colors chimmering from the sides. Technically I was shooting the cars from underneath when they where driving on a big glas. In the film and in the photos the cars are coming from the top and going down, the flow in the film is like a watherfall. A free fall of carbodies. The sound is like the air, a soft wind, it’s empazises the abstract feeling in the piece.

The title comes both from a technically term for transmission in the car engine, to transmit enery from one place to another and in a wider sence it’s about a change.