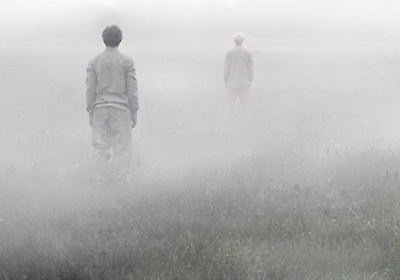 Way ahead is a photographic series about how we meet our future. You can
neither be in the future nor see the future, but you can have an idea of
what the future will bring and see a diffuse picture of it in your head.

Idea-wise I was inspired by paintings of historic battles such as the Battle
of Lützen, etc. Men rising up in the fog trying to see what has happened and
where they are. These paintings have also inspired me from a design
perspective, as they are often created in extreme horizontal formats. Long
and narrow, these pictures give a sense of time and concurrently refer to
the oblong screens of feature film. This horizontality also anchors the
pictures to the ground, they become extreme landscape paintings. The cut of
the images gives the feeling that you are sitting in a bunker looking out at
the world.

While working with this series of photographs, the battle field feeling has
become more and more a sense of uncertainty and optimism for the future.
Meeting that which is to come with expectation.

The men are standing and sitting like figures in an architecture model. They
are unreachable. They create perspective and direction in the diffuse
landscape with their bodies. It is these directions – inwards towards
themselves and outwards, forwards – that form the core of the work. A still
movement.