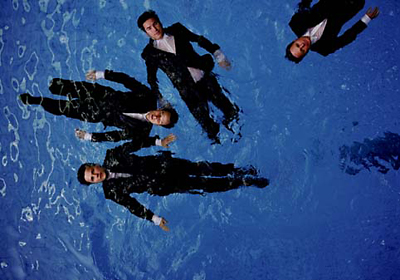 For weeks, Maria Friberg spent time between 12:00 and 2:00 p.m. sitting in a restaurant in the center of Stockholm’s IT district. She sat and watched the passing business people, occasionally speaking with them. She studied them thoroughly, watched how they walked and talked. She registered hair color and style, suits, shoes, smiles and facial expressions. Had she documented her observations more systematically she would have nearly fulfilled all the scientific requirements necessary in many of the social science disciplines. Some of the people she came in contact with ended up being models for her photos. Thus, those images that she has created are the result of a systematic collection of data and of interpretations of her many observations. But Maria Friberg the anthropologist doesn’t work with ethnographies in the traditional sense, because she doesn’t write. What she does is show the lives of a group of people in which she is interested. Her photographs transform her observations into biographies, into descriptions and representations of life.

Men in suits are the flag bearers of modernism. Suits are the ultimate symbol for the well-organized society, where rationality, structure and affectivity are most important. The public image of the ”organization man” is a man in a suit. The ability to control society and the so-called market is materialized in the dark suit. The suit-uniform functions like a protective cape – safety gear in ”cool wool.” Maria Friberg, who in the past has had very little contact with businessmen, has come to know them with a genuine curiosity. They appear in piece after piece and Maria Friberg continues to work on a gigantic project: an investigation of modernism by focusing on the modern man. This investigation leads to a problematic examination of control, order and ambition. By focusing on and studying adult men and what they represent, an institutional quicksand appears. In the images one can discern a fragile societal structure, or more accurately, a society comprised of individuals instead of structures – a society that has no fixed roots.

”At the same time,” ”and,” and ”not only” are some the words and phrases that Maria Friberg uses most often. She’s fascinated – like many people who study society – of the gap between planning and control, of seemingly coincidental results and the private sphere’s influence. The businessman performs on the public stage with the top button buttoned. He structures and plans, attempting to create order and control. At the same time there’s the pull of the uncertain little person who doesn’t have the courage to do anything other than follow the winds of change. The men in ”almost there” are fully capable of creating control, while at the same time it doesn’t seem possible for them to influence their own situation. They are almost there, nearly reaching an undecided and unknown goal.

There’s a cartoon found in many work places that depicts an image of a duck. The text under the picture says: ”Be like a duck. Appear calm on the surface, while paddling like crazy underneath it.” In this image there is no problem on the surface, as it clearly divides what is above and below. But in Maria Friberg’s world the spotlight shines precisely on that demarcation line between surface and what lies below. In her photos the line isn’t only a clean cut boundary. Instead the line in her images exists in three dimensions. They are about the surface of the water itself, that which divides above and below, the middle area – what the post-structuralists call ”the in-between space.”

The men in her photos don’t exist on the surface, nor are they psychologically under the surface. They are in the surface, in a border-land that is neither above nor below. They are somewhere in-between, not completely there – they’ve only partly arrived. They are in the middle of a process and the photos can be seen as moments frozen in time, frozen stories. At the same time there is no linear narrative – the only thing we know are the two words ”almost there”. We are forced to create our own stories from the frozen moments, the paused movements, and connect them only to ”almost there”. To almost be somewhere involves a story about something in transition – something that hasn’t yet occurred. And it is when something is in transition that insecurity, ambivalence, energy and chaos become key elements.

A situation in which everything is in transition creates a kind of horrifying excitement. Or as Michel Serres writes: man has always been afraid of wind and water (perhaps especially water!), and now we are afraid of disorder and the unpredictable. It is this fear that returns repeatedly in Maria Friberg’s images – loss of control and order in a context that, both literally and metaphorically, floats.

Lars Strannegård has a PhD in business economics and is a researcher at the Centre for Advanced Studies in Leadership at the Stockholm School of Economics.