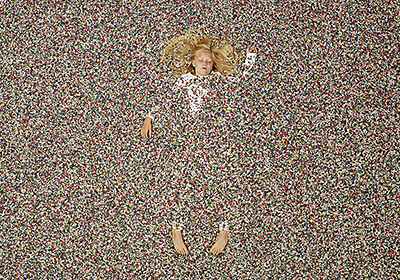 DEPICTIONS OF CONTEMPORARY LIFE
At first glance, Maria Friberg’s works appear to be stagings of fictitious and dreamlike worlds. At the same time, she uses photography – a medium that is closely associated with reality and that is used as a tool in the socially oriented documentary genre. Maria Friberg’s work is characterized by pre- cisely that: a great interest in societal issues and a desire to depict phenomena of contemporary life. Her work tells stories about modern man in a world where the power of nature and culture is difficult to master and where we often are defined by consumption, seduced by endless possibilities, and allowed to retain the illusion of power. In her latest works she addresses these issues from a child’s perspective. It is also through a child that Friberg addresses the influence of technology on our lives and the paradox of loneliness and isolation that arises within a context and a community.

Unlike the work of street photographers who seek to capture decisive moments of life taking place in front of the camera, Maria Friberg’s photographs are the result of carefully planned, large productions in which collaboration with inventors, set designers, and craftsmen are essential in cre- ating the work. References to art history, and painting in particular, often appear in Friberg’s work. Several of the new images depicting solitary characters in subdued but enigmatic spaces were influ- enced by Danish painter Vilhelm Hammershøi. He has been called the painter of solitude, known for portrayals of interiors in which spaciousness and light play an important role. Like Hammershøi, Maria Friberg places great importance on the graphic and formal elements in her works.

A prominent feature of the staged photography with which Maria Friberg works is the image’s aesthetically pleasing qualities. The beauty attracts our gaze in order to then reveal stories that are both subversive and ambiguous in nature. The interaction between the beautiful and the uncanny creates a titillating visual inquisitiveness. Through these subtle measures, Maria Friberg singles out decisive components – or moments – that constitute and define the spirit of the times.