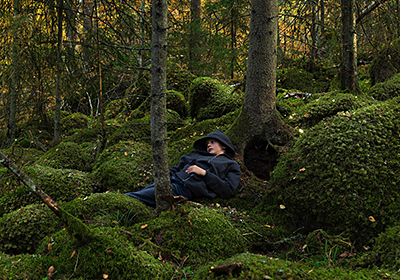 Maria Friberg explores themes of opposition. In today’s youth, she finds a newfound inner strength, beyond consumerism and empty entertainment. Sometimes, doing nothing, saying nothing, is the best way to achieve change – buy nothing, stop flying, stop fighting other people’s wars. It is a revolution, a renaissance, a resistance movement. Having previously worked with themes of masculinity and its formal codes of power, Friberg now turns her gaze on androgynous teenagers, wearing their hoodies like shields in a war against conformity.

Placed in natural habitats, the teenagers in these photographs resemble the fairies, trolls and other fantasy figures in Swedish 19th century artist John Bauer’s dreamlike paintings and illustrations. Here, nature is both comforting and frightening. A dark resting place, where new ideas and ideals emerge. Some of these portraits were taken in woods ravaged by fire during last year’s global heatwave – as a reminder of the negative effects humans have on the environment, but also as a symbol of hope. Out of the ashes, something new will surely grow.