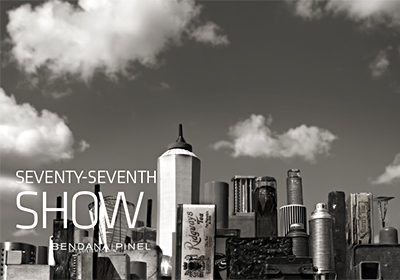 In her most recent series, Force Majeure, Maria Friberg takes us into a staged world that contains real features. At first the mise-en-scène holds our gaze, then directs it towards the astute transformation of objects into imaginary architecture.

Inspired by urban landscapes that Friberg has captured in a variety of surrealistic abstractions that elude time and space. Each work represents an atmospheric vision of modernist architecture, depicting cityscapes crafted from everyday objects, imitating New York, Miami, Detroit, and San Francisco’s Chinatown. The skylines Friberg creates, imply urban dystopias as they suggest lifeless thoroughfares, empty interiors, and lonely streets. The pandemic also drew a black and white veil over our world, depriving life of colour. The sight of the empty city not only evokes memories of the isolation and alienation caused by the confinement, but also awakens memories of the dreams one once had – most of which are now realizable again.

The aesthetic appeal opens the conversation with the work. With the first glance, it becomes clear that the images have a serious undertone. The fast pace of urban society was paralyzed, humanity was forced to stay at home, imposed by a force majeure. The freedom of choice is taken away, and what remains is hope; the hope for a better life, without restrictions, limitations, or fear for one’s own existence. Friberg depicts the shattered dreams of societies whose lives have been abruptly changed by a worldwide pandemic. These streets were once filled with life, where now only a lonely wind blows, leaving emptiness behind.

Maria Friberg addresses sensitive issues in a way that is not intimidating, but instead allows for deep reflection, as well as reminds us to reconnect to profound appreciation and awareness for freedom of movement as well as our surroundings.

Handed evokes, as often in Friberg’s work, the nature and landscapes of her native country. This series invites us to remember walks along the banks of ponds or those spent in museums to experience the landscapes of Monet or the Pre-Raphaelites. But this is not John Everett Millais’ Ophelia floating along singing before her fate tragically ends. It is suitcases, bags, clothes that punctuate these stagnant waters with their presence. Thus, we are not only contemplating a contemporary version of the water lilies, but also a questioning of the ruptures that punctuate our lives. From those that make the suitcases of a family distance themselves from each other, to the more tragic ones of the open suitcases that release and leave for all to see what they were protecting. From rupture to forced exile at the risk of our lives.