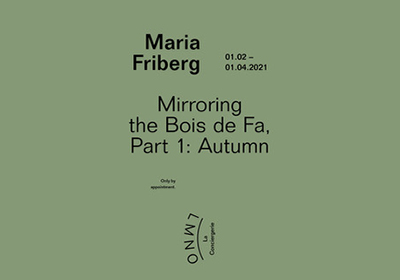 [February 1 – April 1, 2021] LMNO is pleased to invite you to discover a new series of photographs entitled ”Mirroring the Bois de Fa # 1, Part 1: Autumn” by Swedish artist Maria Friberg. This new series takes place in our second space called ”LMNO Conciergerie”. The specificity of ”LMNO Conciergerie” lies in considering this place as a space conducive to the discovery of works produced in the context of commissions (whether public or private). Visitors will therefore discover an important facet of the LMNO spirit: the design of tailor-made projects responding to requests from individuals or from public authorities. Maria Friberg is the first artist to have been chosen to develop a work specific to the Bois de Fa in Grez-Doiceau, in this case, a portrait of the garden. Considered as an experimental site, this space of 6.5 hectares has been welcoming numerous scientists for 4 years in order to protect and develop local biodiversity. Echoing this scientific work, Maria Friberg scrutinizes the reliefs of nature, gets as close as possible to plants by deciding, in particular, to photograph the armilaria. This harmless-looking fungus spreads under the bark of trees, congealing in black filaments and suffocating the tree. She observes other fungi, lichens and bark in photographs that combine a colorful bubbling of natural elements with the monumental force of macro photography. Thus were born four majestic photographs embodying the fall of 2019. This first part of the order (which will include 4 in total) aims in particular to highlight the effects of climate change. An opportunity to delicately and willingly question these essential issues, but also to experience the monumentality of these images produced in our regions by this major artist on the Scandinavian scene. Maria Friberg (1966 °) is a Swedish artist whose work emerged in the 1990s amid the revival of contemporary Scandinavian art. His practice covers photography, video and sculpture. She has been exhibited at major institutions such as: Moderna Museet, the Kisma Museum in Helsinki, the Museum of Fine Arts in Boston, the Denver Museum in Colorado and at the Hasselblad Foundation. She is also in demand for an impressive number of public commissions. LMNO is delighted to show for the second time, in a monographic way, an exhibition of this artist. More info here.